Note from the Pastor

I’ve taught series on Apologetics in a couple places, and some of the verses, ideas and illustrations are useful but sometimes hard to find, so I am putting them in one place to make it easy for you. Where possible, some of these are put up as an image that you can download into an Apologetics album (if you make one) on your phone. Then you have these with you in easy reach.

If this seems like a random collection, please understand that this is a review. If you come to one of my Apologetics seminars, this may be a more useful page.

Click here for the Practice Exam. Take it as many times as you want.

Each requires a password. Text or email me if you forgot it. I sent the passwords through the Purpose Institute email system to the entire class.

Why so many Different churches?

This is such a huge and important question – that I put it on a separate page. Click here to head over there…

Science, Creation & evolution and the God of the Gaps 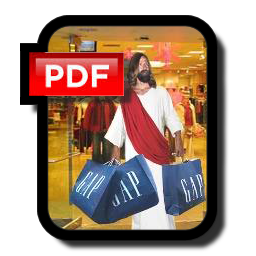 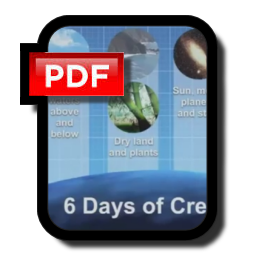 I have two resource packs on this one. The first is on the question of Creation and Evolution. The second focuses more on the Question of the God of the Gaps. Click on either PDF icon to check them out.

I need to add more to this one, but there are some basic passages that come up a lot when witnessing. I highly recommend that you learn about and eventually memorize these core passages on salvation: 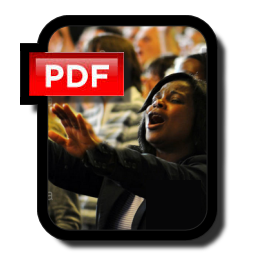 Click on the PDF icon to check out my resource pack from the Navy Seal Bible Study. The Bible Study from this packet is also viewable online on the Bible Study page.

There are nine different categories of arguments in defense of the Christian faith. Not all are recommended, and some of these will only work well with certain personalities and backgrounds. If you are serious about being a good Christian witness, you should think about getting better at a couple of these so you can connect with different kinds of people.

The Nine Ways to Present Your Reason:

Make sure you scroll down to the bottom and consider the unique and amazing qualities of Christianity. But when considering worldviews, there are 4 fundamental questions that any worldview should be able to answer coherently and consistently if it should be worthy of adopting.

Coherently – the answer should be rational and understandable, even perhaps to someone who doesn’t agree with the worldview, but understands the basics of that belief system. The answer should also be live-able, in that the answer to the question should not conflict with daily life decisions.

Consistent – the answer should fit with the other answers from that worldview.

Here are the 4 questions (often posed by Ravi Zacharias in his presentations):

When you consider Christianity, our answers to these 4 questions are satisfying, beautiful and live-able. Our origin points to our intrinsic value – where all humans are creatures made in God’s image with great worth, and we are here on this planet with the gift of life and the question of choice – will we live for God or not? What will we do with this choice. So life has tremendous meaning, in that we are here to either accept or reject God’s plan for us. In the question of morality, humans are made to be moral but are fallen sinful creatures incapable of true, overcoming morality without the power of God operating in their life. But if we let God work in us and through us, our destiny is an eternity in His presence accepting the gift of salvation and His plan.

In contrast, the Atheist materialist/naturalist worldview has very different answers that are largely contradictory to daily life choices. Our origin is meaningless and purposeless. Richard Dawkins even denigrates the question of meaning by calling it a “silly question”. You are not apparently allowed to ask the question that rings deep in the human psyche. Morality is nothing more than chemical impulses and animal instincts and we “dance to the tune of our DNA”. There is no external justification for one moral preference over another. That is all they are – DNA programming and preference. And we have no destiny except perhaps to leave a temporary legacy after we die until even that is forgotten. This worldview leads to widespread nihilism and hedonism, which are growing rampant in Western culture today. 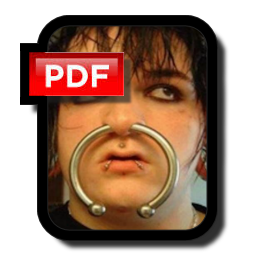 Click on the PDF icon to check out my summary of Post-Modernism along with the Time-Travel word picture.

The Problem of Pain and Suffering 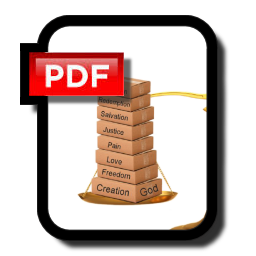 Click on the PDF icon to check out my resource pack from the Navy Seal Bible Study. You can also click on the picture of the two scales to see that word picture in higher resolution

The History of the Trinity 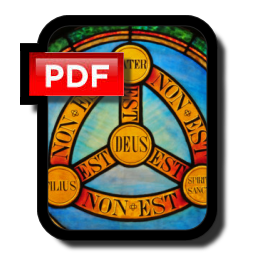 So much to add. I have a great timeline on this along with some invaluable quotes by recognized church historians. For now, click on the PDF link of the timeline.

You can also check out my allegory and mini-Bible study on the incarnation – The Beggar King. It is found on the Bible Study page.

And this Bible Gateway search probably needs an explanation…

Hope this is a blessing.

The Question of Pre-Destination 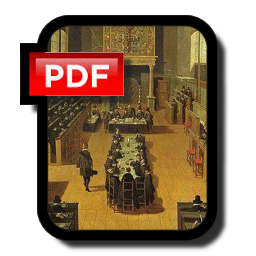 Has the Historic Church Been a Source for Good or Evil?

I am hoping to expand this section soon, but the basic argument (especially from someone like Christopher Hitchens) is that all religion is evil and/or irrational, and that fundamentalist thinking is a primary source of hatred and war in the war. I will add some source examples here so this doesn’t sound like a straw-man argument.

There is a specific argument that I want to handle first. I have repeatedly read the claim that the Catholic Church Inquisitions have killed millions of people in Europe, far more than any single war. Even in college courses, I have heard that the number killed is 90 or 95 million people over the 400 year long period (1200 to 1600 A.D.). This seemed like a very sketchy claim. And it has been easily debunked by others.

I was shocked to read about a graduate student, who was also a Wiccan, who researched a Master’s thesis trying to demonstrate the evils of the historic church. She was surprised to encounter a very different story when she dug into actual historic records. She then decided to publish her research even though it absolutely disagreed with her anti-church bias when she started. First off, the totals have never been in the many millions. But she found that the term “inquisition” was a generic word used for any local or state-wide investigation, whether church officials were involved or not. “Inquisition” just means “investigation”. So if someone was angry at their neighbor and the local sheriff or magistrate was corrupt, they could accuse their neighbor of being a witch, and there would be an inquisition and probably a bribe, and the neighbor would be imprisoned or killed and the land forfeited, likely to be taken over by the accusing neighbor. The church in numerous instances, actually appointed a Catholic “Inquisitor” to have authority in a region where multiple investigations were being carried out, and the Inquisitor actually arrived to halt the corrupt treatment of people.

Her research, and others who have published in her ground-breaking wake, has confirmed that actual deaths throughout Europe over the 400 year of church inquisition total about 50,000 to 150,000 people. This works out to be about 250 people killed per year throughout Europe. In fairness, the killings came mostly in clusters in particular regions where several thousand were likely killed by corrupt and evil men pretending they were Christian. But millions? No. That is a stupid and ignorant claim.

Please understand me. I am not denying that thousands were tortured and killed in various programs by historic Christian churches. I am horrified that the historic church, including Catholic popes, and Protestant leaders such as Martin Luther and John Calvin, played a direct role in killing people for disagreeing about doctrine and belief. This is why I am Apostolic. We get our beliefs from the Bible, not from church history. And anyone who murders people for disagreeing about theology is absolutely violating the teachings of Jesus Christ, and will burn in hell if they did not repent for their atrocities.

That being said, it is dishonest, ignorant and dangerous to portray the historic church as being a primary cause for violence and evil in the world. The church at its most corrupt, was better for planet Earth and human civilization, than any Socialist regime of the 20th century.

This section is not here to defend everything done in the Crusades. There were certainly horrific acts committed by Crusaders calling themselves Christians. Many of the actions of the historic Christian church do not match up with the teachings of Jesus and the Apostles. I do believe the historic church has been an overwhelming force for good throughout history, even when it largely departed from New Testament doctrine. I am not claiming that the Crusades or Crusaders were morally justified in any atrocities committed. 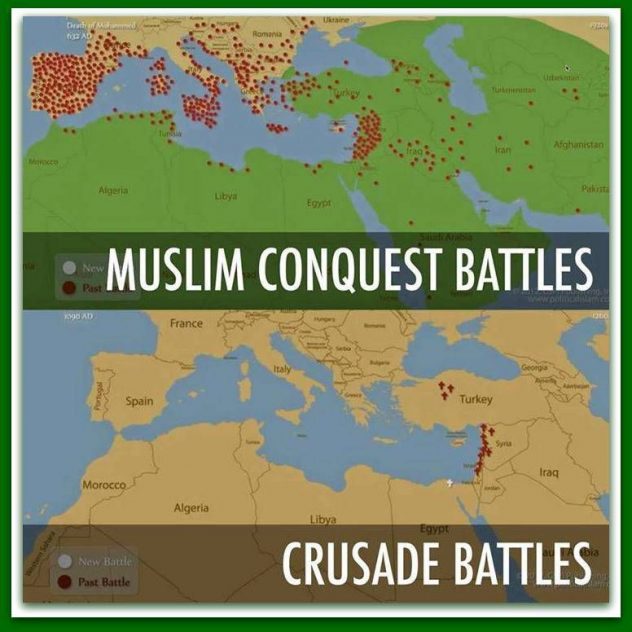 I am plainly stating that there can be no reasonable comparison with the minimal and reactionary nature of the Crusades and with the systematic, aggressive, violent expansion of Islam by military conquest in the Middle East and Mediterranean regions. It is ridiculous and ignorant to claim they are remotely equivalent. Just look at this map illustrating the striking difference between the two along with a video animation showing that difference over time. Click on the map to see the larger version. 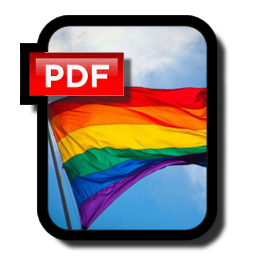 Click on the PDF icon to check out the resource packet from the Navy Seal Bible Study.

The Uniqueness and Moral Superiority of the Christian Worldview

The Most Important Thing is Love

Brilliant arguments, or even supernatural gifts and revelation, are worth nothing according to the Bible, without Godly love. 1st Peter 3:15 tells us to be ready with an answer, with humility and fear. Study the context (1st Peter 3:8-17) of this famous witnessing verse to discover the attitude that Peter is calling a witness to have:

Let’s not forget that love must be the driving force in our witness.

Three things will last forever—faith, hope, and love—and the greatest of these is love.

And all things, whatsoever ye shall ask in prayer, believing, ye shall receive.
Matthew 21:22
DailyVerses.net
Scroll Up