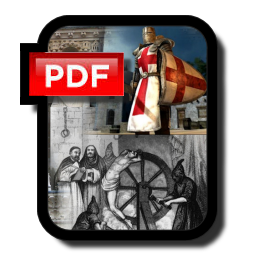 If the Bible is the Word of God, and all Christians agree on this, then why are there so many churches and so many interpretations of scripture? This is best answered with a little history on the church, and on the unfortunate clean-up operation that makes up the story of the Protestant Reformation.

I have a larger version of this Bible study but not yet in an online form. The PDF link is a short timeline I have offered in class (it is part of my Cheat Sheet Teacher’s Guide for Exploring God’s Word) that people have used along with some useful graphics files below. The point of the PDF timeline is to show the gradual change from New Testament doctrine to a historic church that was corrupt, secular and ego-driven and far removed from the example of Jesus and the Apostles. This is not meant as a slight against any Christians today, or even against positive elements of the historic church. It’s just a plain historic fact that the “official” church hundreds of years ago grew quite awful in numerous ways and most if not all church historians agree on this point.

Martin Luther was not the first to stand up to the corruptions of the church. He was, however, the first to protest and survive. He made a list of 95 (yes 95) complaints against the church in his day and published it, and that begin the “Protestant Reformation” – the protest and cleanup of the historic church. Kicked out of the church, he began what we call the Lutherans by changing a number of practices in an attempt to get back to the Biblical pattern.

You will find that each major church denomination arrived at its beliefs by starting with the Bible and church history (mainly Catholic Church history), then major Protestant groups removed the things that they didn’t like to arrive at their core beliefs. I call this Protestant Math:

The Bible
+ Church History
– Some Bad Stuff
= That Denominations Beliefs

So maybe some examples would make this easier. I mention these groups not as a criticism, but in the historic context of understanding where we all come from. Please understand that I am thankful for the efforts of many that came before us to get us back to Biblical Christianity. I am thankful for good Catholics and good Lutherans and good Anabaptists and (I better stop, since I cannot list everyone…)

Lutherans
Martin Luther was disgusted with multiple corrupt practices in the historic church in his day, and listed his complaints hoping to reform the Catholic church. Kicked out and unable to reform from within, he is credited with being the first major influence to reform without – that’s why we call this the Reformation. So his Protestant Math formula would include:

Baptists
Similar in their list to the Lutherans, but they also noticed that Baptism in the Bible was for people old enough to confess faith in Christ. So they took the Protestant Math formula further…

Presbyterians
Similar to the Baptists, but they wanted to emphasize that church government should be done by an assembly of elders (the presbyters). So they took the Protestant Math formula and removed the notion of a central ruling pope or individual ruler.

I am simplifying the math a little here, but this is the core difference between all the different Protestant groups. Each uses the same Bible but a different math formula. Each disagrees with different parts of the messy church history left by the Catholic Church. Given the time, we could write out a Protestant Math formula for each denomination.

There’s another part of this history that is quite unfortunate. Each group identified  historic church issues they wanted to address and reform, but then frequently became angry and intolerant of another group wanting to change and reform something else. This led to “so-called Christians” persecuting and even killing other “Christians” over disagreements on what to reform. You might think this was fine, or was historically acceptable, but I find the idea of murdering other Christ-followers (or anyone) to be evil, sinful and repugnant. I appreciate the courage of Reformation leaders to make a stand, but I condemn their intolerance towards differences among believers, and I condemn their failure to follow Jesus’ basic teachings on loving your enemies.

Each group in the Protestant movement shares a lot in common, but each uses a slightly different version of Protestant Math to reach their belief system. It’s not because the Bible is different for each or hard to understand. It’s because each is emphasizing something different that the historic church had done, but they no longer want to do. That is why all these groups are called “Protestant” – because they arrive at their belief through the “Protest” of the historic church.

But protest is a messy away to arrive at a system of belief, and it tends to cause over-correction instead of a balanced response to excess. If a parent is very strict, the child in protest might grow up and raise their children with lax parenting to avoid that mistake. But the parent next door might have been lax, and their children might grow up and be much stricter because they see the harm of lax parenting. Instead of protesting how you were raised, it would be healthier to choose a balanced middle path of limited rules and limited freedom. Protest is a crummy way to reach a decision.

Apostolics ultimately come out of the Protestant tradition. The Methodists broke away from the church of England and led to the great revival services in the 1800’s which led to the Azusa Street Pentecostal Revival. This started the Pentecostal movement of the 1900’s, which quickly led to the birth of the Apostolic movement a few years after Azusa Street.

All Protestants claim to follow the teaching of “Sola Scripture” or Salvation from Scripture alone, but Apostolics have taken the further step of no longer using church history and the decisions of Popes and Church Councils as a basis of our beliefs. We believe God has protected and preserved His word throughout church history and that we have the know-able and inerrant Word of God. The Bible should be the sole and final authority for all matters of doctrine, and we are attempting to follow a much simpler math formula. What did Jesus and the Apostles do? Let’s try to do that…

Apostolics:
The Bible = My Beliefs

Apostolics do borrow ideas and traditions from the historic church (such as congregations with pews and pulpits and buildings to meet in) and likely have our own traditions, but we don’t elevate them to the status of scripture or claim you have to follow them to be saved or a Christian. In terms of official doctrine and especially concerning salvation, we try to speak where the Bible speaks and we try to be silent where the Bible is silent.

Apostolics in the 21st Century

In like manner, our culture is rapidly shifting towards a significantly less Christian perspective. Many Protestant organizations are struggling to maintain their identity in this shift. You may have noticed that is difficulty to even figure out what many churches believe when you look at their name or their website. Because they use a math formula that goes beyond the Bible to include history to establish their doctrine, they find themselves including new teachings and positions that are very incompatible with the Bible.

Apostolics strive to use the much simpler formula (the Bible = my beliefs) and so as our culture shifts away from Christian thinking, Apostolics are less affected by the change and more able to answer with a Bible-based answer.

Here is a final version of the graphic with the 2 formulas combined for convenience.

Note from the Pastor

If you read a little church history, and consider the analogy of math formulas above, you will realize that the question of so many churches is not so hard to understand.

We’re all trying to follow Jesus and use the Bible. It’s hard for anyone to recognize that the traditions you have grown up in might not line up to the Word of God, but each of us needs to check our background and personal opinions and culture against the Bible. If we put God’s Word first in our lives, He will lead us into all truth!

I will both lay me down in peace, and sleep: for thou, LORD, only makest me dwell in safety.
Psalm 4:8
DailyVerses.net
Scroll Up